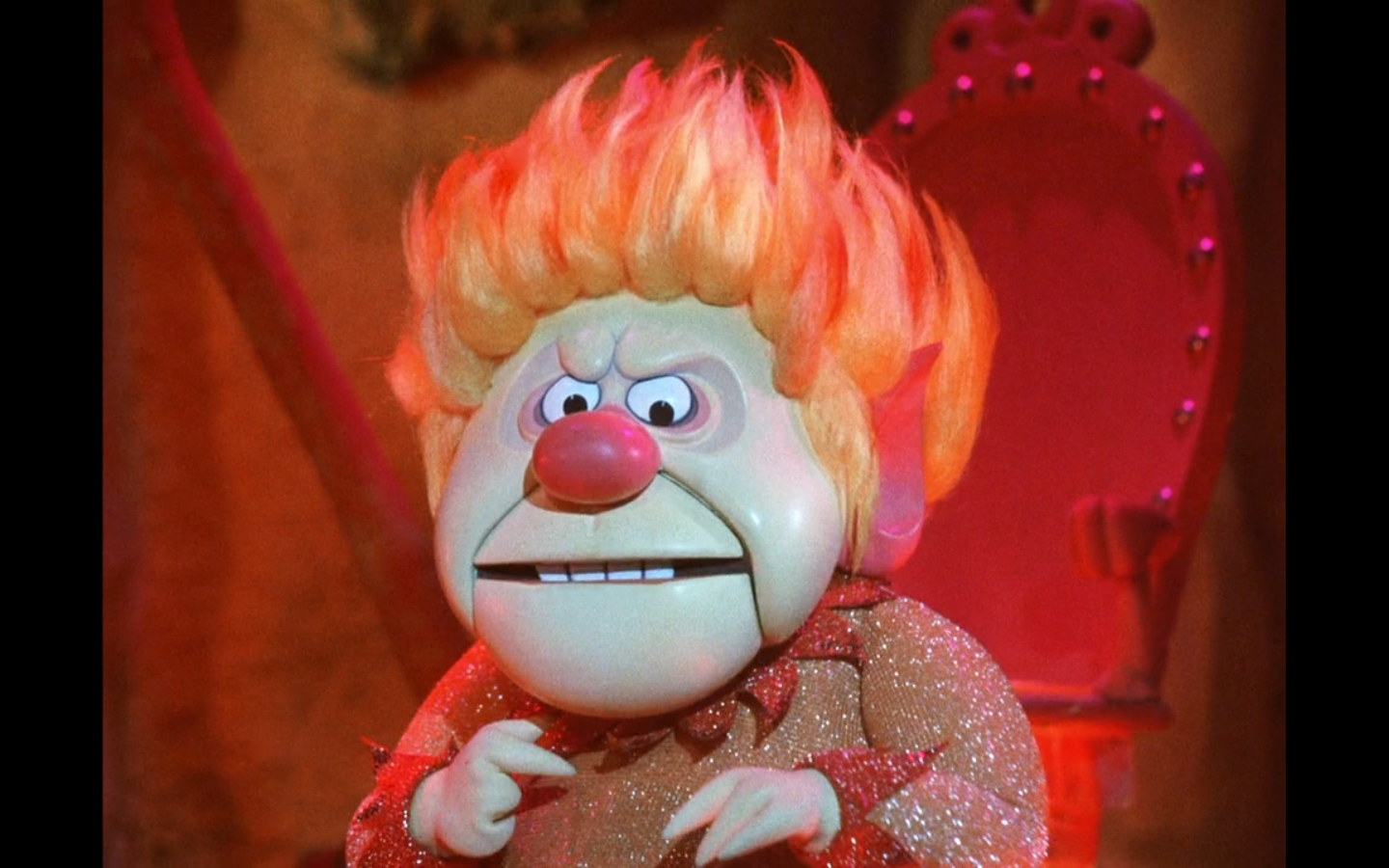 I was out and about yesterday and my goodness it was warm. It got me thinking of having a ‘Green Christmas’ rather than a ‘White Christmas’ and that inevitably made me think of Heatmiser from Rankin and Bass’ stop-motion Christmas Special “The Year without a Santa Claus“.

If you haven’t seen the TV special, it’s pretty fun. I am a fan of stop-motion animation, so I have fond memories of the movie. I adore the songs introducing the Miser-Brothers. Heatmiser is responsible for keeping things warm in the south. His stepbrother, Snowmiser, is in charge of keeping things cold in the north. (Though even as a kid I wondered about who was in charge of the south-pole…).

In the film, Mrs. Claus needs it to snow in Southtown, the USA for… reasons. She, along with a boy named Iggy and a pair of elves named Jingle and Jangle, visit the Snowmiser.

Snowmiser, of course, would love to make it snow in Southtown. But that’s his brother’s territory, and he needs permission first. Heatmiser would turn all of Snowmiser’s snow into rain or fog otherwise. So Mrs. Claus and company visit Heatmiser to ask him for a snowy day in the south.

Heatmiser is outraged by the mere suggestion. But, he is willing to allow a snowday in the south if he gets to have a warm day at the North Pole. Mrs. Claus calls Snowmiser, the brothers argue and Mrs. Claus goes over their heads and speaks with their mother (because it’s far more efficient). Things get sorted, there is not a year without a Santa Claus, in snows in Southtown, the north-pole gets a ‘nice spring day’, and everyone gets presents on Christmas.

It’s a cute little movie. I love it mostly for the nostalgia. But with the weather we’ve been having, it feels like Snowmiser and Heatmiser have made some sort of arrangement. Back in October, the NOAA predicted the winter outlook for the U.S.A. and it seems like everything’s flipped on its head.

This Christmas Eve, it was wonderful outside, if slightly out of place for the time of year. On my way to Toronto, it was 13 degrees! In fact, yesterday was Toronto’s hottest Christmas Eve in 175 years. I thought ‘climate change’ was to blame. However, a little digging reminded me that this is an El Niño year. And not just any El Niño year but a strong one.

El Niño causes the eastern Pacific ocean and the air above it to warm. This hot air shifts the Polar Jet Stream and influences the temperature of North America.  Source: NOAA

El Niño occurs when the tropical Pacific Ocean trade winds slow down and the ocean of the eastern Pacific warms up. The counterpart to El Niño is La Niña. La Niña happens when the Pacific trade winds blow even harder than normal and the eastern Pacific cools. El Niño and La Niña occur in a cycle that takes between 3-7 years. This cycle is called the El Niño/Southern Oscillation. While it happens over the Pacific it has tremendous impacts on all of North American and the rest of the world.

So maybe Mother Nature used El Niño to get her boys to cooperate. 😛